Sorry for the absence, but I have been extremely busy for the last few days with RL issues and crunching numbers. I got about six hours sleep total Wednesday and Thursday, and just got some real sack time last night.

If you are not a nerd or a dork, just skip straight to the picture of the cockleburr below and read from there.
But, to be honest, some of my lack of sleep is due to the fact that I had so many numbers to crunch in such a short time that I decided the quickest way to do it was write another translation program. Which worked well, and did save time, until I decided that it would be so convenient to just use some of those APIs I had lying around for a spare moment to incorporate some analysis and graphing right into that little program. Which worked well, and did save time, until I snapped and started to play with this new numeric analysis program that one of my brothers dropped off at Christmas. (A deed equivalent to hanging around the exits of drug treatment centers and handing out free samples of cocaine and heroine to the departing patients. It's not my fault - I think I showed great character in waiting three weeks to indulge.) The manual is 264 pages, and when I was too tired to sleep, I started reading it.

I'm having too much fun to feel as embarrassed as I should. (Only another programming addict could really understand this paragraph, and if any such person reads this, that person will be nodding and thinking "That could happen to absolutely anyone!" There are, let's face it, only two types of people in this regard. For one type, a two hundred page manual for a number crunching program is a superb sophorific, and for the second type, it's like drinking six cups of coffee because your mind gets totally engaged. My buzz lasted for two days.) The manual is well written, and GREAT for teaching. You can get it free here! I only wish that some of these principles had been applied in recent years. For instance, I think several of the NRSRO executives should have this passage tattooed in large letters on their chests:

The problem explicitly takes into account the fact that overall risk is not just the sum of the riskiness of the individual assets, as their future performances are highly likely to be correlated: shares tend to go up and down together, and shares in a particular sector tend to be highly correlated.

You can call this thing from a command line. Since the major financial asset risks are now shifting away from the exceptional "plague" model I have been applying, and into the more traditional modes, I couldn't resist just a quickie tie into this baby from that there little quickie time-saving thingamabob I finished. If you download the manual, don't blame the ensuing carnage on me. I gave you full warning. The full software package is very expensive, but you can get a free student version if you are a student. You can get a java wrapper for this.

Wrenching my mind away from my obsession, we come to cockleburrs. What's a cockleburr? Here's a picture:
That is the rough cockleburr. 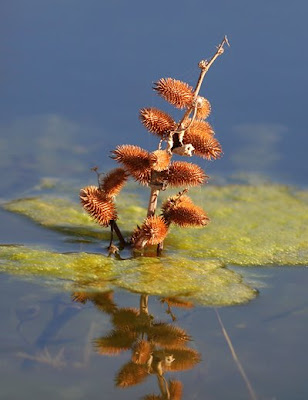 Bad as the economic news is, all this number crunching I am doing shows stabilization ensuing from the P-Nat shift showing widening margins that I mentioned a while ago. The first blobs of evidence are in US FUT, German confidence surveys and retail.

We have one more unavoidable global shock coming, and that is the Eurobank disaster. It will be very large and require massive Eurozone bailouts and stimulus.

Nonetheless, spendable incomes are beginning to recover, and consumer-related businesses are getting nearer to the low point, after which they stop slashing and begin to build again. After that point, unemployment and bad debt figures still rise for quite a while. Economies have their own rhythms which can't be easily changed.

So the cockleburrs involve dealing with the self-inflicted reality of an economic downturn with some legs, generated largely by the hangover of lunatic lending. In the middle of this thing is the fried egg of the energy crunch produced by the egg white (overbuilding of production capacity combined with energy subsidies in Asia) and the yolk (lack of financial regulation leading to a speculative boom in prices, which created an ensuing bust). Put another way, the lunatic lending produced a strong correlation across financial assets, once positive and now negative, and in the positive phase of that correlation, speculation produced by lunatic lending produced a strong correlation on energy prices, which then pretty much wound all correlations together and shifted into the negative spiral. We are in the last fourth of that negative spiral (mostly through the egg yolk).

Shades of green mark growth intervals (the darker the green, the stronger the growth), and red shades mark contracting intervals. That red circle is the egg yolk of the energy run-up, which correlated and produced the current sharp contraction in world trade.

The thick dark line is the current trajectory. We aren't all the way through to the dark arrow, but the conditions are set so that line can't be changed, and we are almost there.

Extrapolating from current circumstances, the next two fainter lines describe the arc of possibilities for heading out of the downturn, into the next part of the credit crisis, and through the trough into recovery without further (unknown) shocks and changes in public policy. The difference between those is mostly the unknown portion of the Eurobank crisis.

That bent line that veers through the lighter purple, across a very faint part of the recovery, and into a flatter growth cycle is the likeliest trajectory if the US follows the Dem's "green" policy. Under the circumstances, it's more of a "red" policy.

The reason why that trajectory is so odd and unfavorable is that such a policy correlates back to energy, raises PPI, and cuts real growth and global competitiveness. The end of that (faint arrow) is approximately 3 years out, further past I cannot see. The total time frame on the strong line (stuff that has already mostly happened) is about 4 years.

I have dutifully read up on the 825 stimulus package and as much of Obama's direction as I can decode from the rather vague rhetoric, and I am upgrading my forecast to 83-84% chance of depression-like event for the US, because the Dems aren't spending much of that stimulus on anything quickly, and they are spending an awful lot of money, which is going to be a drag as soon as we get through the bounceback this year. It's the craziest economic agenda I have seen in a long time, but they did win the election and I assume they are going to execute their plans. The contributions to politicians will be high, and the corresponding cost to the US taxpayer will be higher.

The upshot is that the rest of the US is going to follow CA, which is an ugly prospect. CA's unemployment in December was over 9%, and sales and use tax receipts in November (latest data) were only 81% of November 07's. (2078/2557). Intimidating, and the lesson is that too much welfare renders you unable to spend on welfare. Pelosi is in control, and Pelosi is a CA Democrat, so eventually the US will find itself defaulting on assistance to those who most need it. Grim.