All you can do is laugh. The Iranians are offended by a new cartoon published in Germany:

The new controversial cartoon shows the Iranian national team standing in a World Cup stadium with bombs strapped to their jerseys has caused anger in Iran.

The cartoon, which was printed in the Friday edition of Berlin's Tagesspiegel, also depicts German soldiers standing in the stadium with a caption saying, "Why at the World Cup of all places does the German army have to be on duty?"

The Iranian newspaper 90 has called the cartoon "shameless" and called on the Iranian football federation to lodge an official protest.

"It is now clear that the Germans are under the influence of the Zionists (Israel) and have lowered themselves to become their scarecrows," wrote 90.

And according to Iowahawk, the Midwest has experienced rampaging hordes of Lutherans terrorizing Denny's and IHOPs in response to a disrespectful Vince Lombardi cartoon: 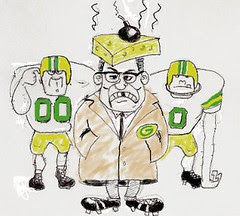 Also, a Philadelphia paper republished one of the Danish cartoons (Muhammed with a bomb in his turban) along with an article about the controversy, and Muslims picketed the paper this weekend. Peacefully. The editor went out and talked to them. In the meantime, the UK government is launching a "respect" drive.