Okay, anyone who truly believes that it is just military spending that's the problem and that Bill Clinton somehow presided over a wonderland of economic times in which our federal budget problems were overcome is living in a fantasy world. Likewise, anyone who truly believes that the problem is just a matter of cutting spending and cutting taxes is living in a fantasy world.

Here is one way of looking at it: 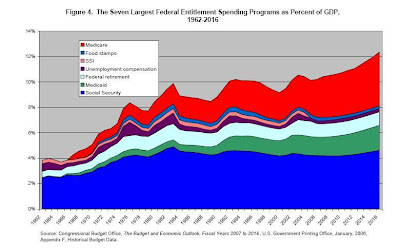 Demographics are the largest factor influencing entitlement spending. The apparent "good" years of the Clinton regime were largely a function of the dot.com bubble and a temporary dip in growth of entitlements. Some of that dip was relative to GDP, some was as a result of curbing spending, and some was a demographic blip.

Granted, trying to foster high economic growth is a priority, because the expected spending on entitlements is really pretty fixed. Sustaining the highest rate of population growth consistent with rising wages should be another priority. Neither will fix the situation, which is that we may have made the boomers pay higher social security and medicare taxes for their retirement after 1982, but we kinda, sorta, forget to like, man, save that money. The surpluses went into general revenue. We don't have any reserve funds other than borrowing.

So now we are going to have to tax ourselves to pay for it, as well as borrow.

No matter who we elect to Congress and as President, they are still stuck with some realities. There's a long historical perspective pdf file up at OMB, and the following figures are taken from tables 8.3 and 8.4, whch are on pages 140 and 141.

If we have a bad recession, the projected numbers until 2013 are obviously going to be too optimistic. If we really believe that we can cut Social Security all that much we are whacked, because we will just end up spending it in food stamps. The average Social Security retiree at this point gets less than $1,000 monthly. The more you try to cut Medicare, the more costs you push onto the private sector, and the more Medicaid costs. We are at the point at which we just need to settle down and figure out how to pay the bills!!

To sum up my opinion: The fiscal conservatives make no sense, the fiscal liberals make no sense, and the fiscal libertarians who want to halve the size of the federal government have had one too many mushrooms and are currently orbiting Mars. So what if Social Security and Medicare were flawed from the start? You can't tax most Americans over 15% for the bulk of their working lives and then say "Haw, haw! It was just a joke! You should have saved - you're on your own!" If you hadn't taxed them, they could have saved. A lot of their savings went to the federal government!

If we were all evil, we could all just vote for the presidential candidate we really, really dislike on the hopes that candidate would win and get the punishment he or she deserved. The next guy or gal is either going to be a delusional, inspired liar or a one-term president.

Anyway, the president doesn't have the power to do much with fiscal policy. Congress does, and Congress has no intention of dealing with this. Instead they are wandering around talking about mythical trust funds. Next they'll retain Fitch, Moody and S&P to explain how it all really adds up. I tell people to get used to living well within their means now, because in about a decade your means will be worse and your taxes are sure to be higher.

Comments:
The decisions made by one administration will have economic effects that won't show up until much later. It's like steering an aircraft carrier, except the time constants are much longer.

This is not unique to government. Jeff Immelt became CEO of GE in 2001, but it will probably be hard to give a fair assessment of his performance prior to 2010 or so. And he has far more direct control over his company than a President has over the federal government, let alone the state/local governments and the private economy.

True - heck, the basic situation now is the product of a number of administrations.

For the American electorate to be unwilling to confront it does not help the political situation.

I watched the video the other day:

I watched the California Democratic Presidential debate the other night with my 5th grade son. All the dire talk of a broken healthcare system and medicare bankruptcy spooked him.

I put it like this: These are real problems, but things are better today than they were decades ago and things will be better in the future. I also commented as follows: One, people live longer so they have more medical expenses in retirement. Second, life improving procedures like hip replacements, while expensive, were never dreamed of in the past. In a strange way, we're a victim of our own success.

His response was that our problems don't seem that bad compared to the past or the alternatives. He felt better and so did I.

Here's how I see it, we need to manage the public's expectations better. We now seem to have told them that they are entitled to whatever level of health care they desire. Need an organ transplant? No problem. Want to run your kids into emergency care instead of waiting for office hours (non-emergency)? We'll cover that too. We need to rescind that medicaid prescription bill, before people start expecting that. We need to make emergency care insurance more available, so that people aren't bankrupted in those situations. If enough folks can easily get that, rates should go down. Most importantly, we need to means test Social Security and make sure that people who don't pay into the system don't get it. We could remove the income cap on who pays into SS and that might add some funding as well. No easy fixes but we might get there with someone willing to talk straight to the public. The problem is that straight talk is not what gets you elected.

MAB - yes, that's kind of the way I feel about it. As far as I can see, part of our problem is that people are just buying into the idea that they should get free medical care.

I went back and compared what my family spent back on medical to the Great Depression, and it was a higher cost as a percentage of income than many people are prepared to pay today. It was in the 60's, too, in the 70's, and in the 80's. Obviously you got less back than because there was less.

I feel chilled when a family that makes 50K a year thinks someone else should pay to insure their healthy children, but thinks nothing of buying a new car with a $500 monthly payment. People just didn't buy a new car back then when it was a choice between a new car and health insurance.

I can see helping families with sick children, because they often can't buy insurance on them. But one of our very real problems is that our citizens are not willing to pay the average and ordinary cost of health care, and somehow seem to believe that someone else should. I don't wish to be cruel or point out one particular person, but in the recent debate over extending the SCHIP program to cover families with higher incomes, one of the examples given of who needed it was a family with a low 50K income, which was spending over $9,000 a year to send their daughter to private school, but would not buy insurance for her. I do not think that this is a good choice, nor is it one that journalists or the government should encourage. What the public is really paying for in that case is to send the child to private school rather than health insurance.

When Teri writes that straight talk is not what gets you elected, we can figure out why people are thinking the way they are. It's the politicians who pretend that we can get free health care. They also pretend that we have real trust funds with assets in them to pay for SS & Medicare expenses. It is they who push the delusions.

We do have problems in our system:
1) Some people have no access to group-rated insurance, and
2) The lack of portability of insurance, and
3) The very strong possibility of losing insurance you had from work if you do get seriously ill.
4) The high rate of unemployment or self-employment or underemployment among the 58 plus crew.

Those are all problems that are quite separate from people refusing to pay for insurance or healthcare. We can work with the type of delivery system, we can establish special access so that these problems are taken care of.

If people really believe that someone else should pay for insurance and health care, they are bound to be disappointed. If we want to provide healthcare to all, most of us are going to have to shell out for it. Nor can we extend Medicare to every citizen and keep its average costs where they are now, because private health insurance is now funding Medicare and Medicaid. If everyone gets on these plans, reimbursement rates are going to go up.

Covey, whenever anyone starts talking about the US "empire", you know they're full of it. When you Brits had one, it paid you. We pay ours.

He's lumping in stuff like payments to secure nuclear fuel, UN spending and the like, also VA payments. No matter what happens, we aren't going to be eliminating VA for the vets who are out there.

This isn't an empire. It's a non-empire Pax Americana, and it's long past time that other couuntries started doing more to achieve it. That would require some aging and effete countries to get their dobbers up, so I'm not holding my breath.

In the wake of 9/11, we lost 2 trillion. We're going to be spending more for within-border security for some time.

I think we are going to have to roll federal, state and local government spending back, but it is going to be a bitch and a half, because at this point a lot of it is locked up in retirement benefits of one sort or another.

I agree that we all have to step up to the plate and do our bit and as someone who has fought in N Ireland, The Falklands War and Gulf l I would be the first to say that defence spending probably needs to be high at present, but I also remember that the UK only finished paying off all the debts from WW2 some 5 years ago.

We (US + UK)appear to have won WW2 but at a cost that nearly bankrupted this country, and certainly broke the Empire.

It is best not to make the same mistake twice!!