Because Sharing Is Caring

Tom Friedman is one of the most brilliant exponents of the DC-NY Axis of Factlessness. Naturally, the NY Times and many news shows think the guy's fabulous and give him a platform. His current column reads as if it were a deliberate parody, but it is not.

Can you spot the egregious fiscal errors in his example of what the family ought to do?

Only in the DC-NY Axis of Factlessness do pundits and politicians concoct fictitious examples that disprove the cases they are trying to make. Our "betters" are incompetent, and too incompetent to know they are incompetent.

Update: Mark at Illusion of Prosperity assigned his entire research department to this problem, and those fine folks delivered once again. You've got music, you've got lyrics, you've got old hairstyles.... This is great stuff:

For a slightly more realistic look at the situation, The Sarcasm Report update.

Small Dead Animals (because a picture is worth a thousand words): 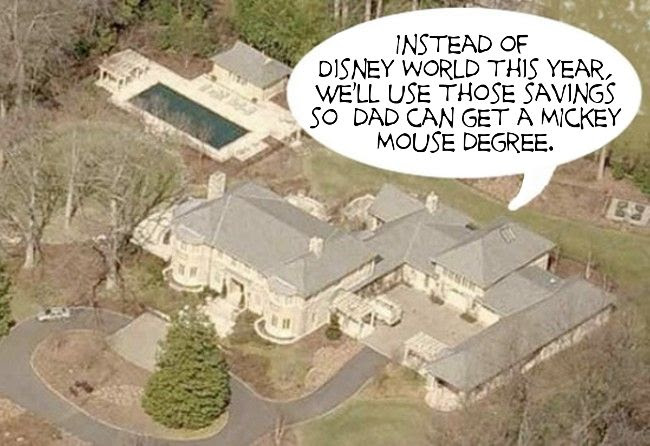 Average cost of a master's degree. The figures given here are quite low; degrees that are more marketable generally cost a lot more. I cannot figure out how anyone could get a master's for less than 30K, and that would be one hell of a Disney vacation. The really cool thing is that if you get one of those el cheapo master's, your average lifetime return is negative. So maybe you don't want to waste the money on a tent.

"Can you spot the egregious fiscal errors in his example of what the family ought to do?"

Was it not hunkering down?

Was it not paying off their credit cards?

Was it the camping in the state park that would somehow generate "savings"?

Was it buying the violin with maxed out credit cards?

Was it funding a master's degree without an obvious source of funds to do so?

Was it telling Kabul to find a job with unemployment at 9.8%?

Was it the hypocrisy of blaming "we’re still piling up debt" while simultaneously advocating taking on even more debt?

I'm stumped here. So many choices.

I can relate to this story. We are hunkered. My girlfriend is back in school. It isn't cheap. It would be *impossible* for her to do it if I didn't support her. His hypothetical family has NO support. Therefore, I would argue that his solution for them is virtually impossible.

Mark - it is a rich target opportunity, isn't it?

I am trying to fight off a cold, and hence my mood is dark and gloomy. Yet every time I read his article I burst out laughing. It's Friedman in Fiscal Wonderland.

I think absolutely the best is the theory that camping in the state park would generate enough savings to pay for grad school.

If only the legions graduating with advanced degrees and 100K to 250K in debt had thought of that!

Mark, only YOU can do justice to this. It needs a song. It needs the full snarky mark treatment. Please - go. Kill. Maim.

The idea that the average working class family depending on unemployment takes vacations, and spends enough on video games and electronics to pay for tuition was also a thing of joy to me.

Or is it propaganda to make the people being pillaged by the NY-DC axis feel that 1) they have some control in their situation and 2) they bear personal responsibility/blame when things don't work out?

Friedman himself may be a useful idiot, but like Mish asks today are the folks that make the rules incompetent or beholden?

I think beholden. When 75% of the country somehow has it figured out and is complaining about the unsustainability of our current trajectory, and yet they forge on ahead anyway, that's beholden.

Do these people truly not understand how many college educated people work in call centers? Or many other low paying jobs that should never require a college education? It's like that article yesterday about how hard it is to be a family earning $250,000 a year. Or similar to that well meant advice on shopping for clothes in thrift stores, as if the low income folks have never heard of that.

On an unrelated note, if you want to cause a minor fuss with an Obama supporter, ask them why Abe Lincoln, a self-educated man, was able to write his own speeches and so many Harvard educated presidents are not.

"On an unrelated note, if you want to cause a minor fuss with an Obama supporter, ask them why Abe Lincoln, a self-educated man, was able to write his own speeches and so many Harvard educated presidents are not."

We get what we deserve apparently, be it Bush or Obama.

Teri - No, they truly do not understand that raising two kids as a working class family with one person unemployed leaves the tent as a housing option rather than a vacation option.

If you do not laugh, you will cry, so you might as well laugh.

One of the more interesting math problems of the housing bubble was this one in my opinion.

If a home with two wage earners is living paycheck to paycheck and either one loses his/her job then the house is also at risk. If unemployment is about 10% then one might argue that the house is about 20% at risk (19% if one considers 0.9*0.9=0.81).

In other words, having two wage earners living paycheck to paycheck can make the overall housing market much more unstable than just one.

I don't believe "they" ever understood that "subprime" math though. They were once again too caught up looking at averaged data flowing in the rear view mirror.

"If you do not laugh, you will cry, so you might as well laugh."

And on that note, I highly recommend Doctor Horrible's Sing Along Blog. You'll get a bit of both. It came out in 2008 but I somehow managed to miss it. It's the best thing I've seen in a long time.

So when the Hoovervilles pop up, we should call them Friedmanvilles. Motto: "They're not unemployed, they're just taking a really long unpaid vacation."

Do these people truly not understand how many college educated people work in call centers? Or many other low paying jobs that should never require a college education?

That's because of anti-discrimination laws. Employers are restricted to a certain extent from using their judgment or any sort of aptitude test during the hiring process for fear of discrimination. As a bonus, in order to fire an employee, employers are well-advised to build a documented case that it is either "for cause" or part of a RIF.

As a result, employers look to a third-party certifying agency (universities) to screen potential employees for intelligence and work habits, at great expense to the prospective employee.

None of this is absolute policy, but it affects enough hiring to make it a very real effect. That's why you can go to a party school for four years and major in basket-weaving or some such, and it does, in fact, increase your lifetime earnings.

See this link for some data: http://www.dba-oracle.com/t_increased_earnings_income_bachelors_masters_doctorate.htm

In my opinion, in the last several years the universities have increased their prices and lowered the quality of their product to where the schools at the bottom of the value/price scale have captured more of the benefit for themselves rather than the student. But the student still earns more top-line revenue.

Yeah and having said all those bad things about college, I'm considering going back to finish off my BA. Possibly foolish, given my age, but it's starting to look like the best way to do something else with my life. If I'm gonna have to work until I'm 70, I'd like to have some options.

Bad or not, credentialism is the law of the land. Good luck!

And he doesn't even consider the possibility that the money might be better spent in starting a small business of some kind, or in taking training for some non-college-requiring skill.

What a narrow man.