It kind of bugs me that the press keeps reporting numbers without statistical significance as if they mean anything.

New Home sales:
The August monthly change and the YoY change are so far below statistical significance that it is not worthwhile thinking about the numbers. The monthly is negative and the YoY is a larger 6.1% positive, but the 90% confidence range on the YoY is 18.8%, so just ignore it and throw it in the "nothing happening here" bucket.

The only number on this report that has statistical significance is the YTD YoY comparison, which is unfortunately negative at -8.3%, but this is influenced by housing credits, so again, ignoring it is the wisest course. The 90% confidence interval on that is +/- 4.4%. However revisions over the summer have been up, and this can be viewed as a moderately positive sign. When series like this drop out of statistical significance, I place more weight on revisions patterns than the numbers themselves.

Both median and average sales prices were down in August, but I think this is a mix effect. Not that I don't believe home prices are still dropping, but the new homes being built are mostly smaller and more modestly constructed, and as the older ones move off the market it is inevitable that offerings will shift downward in price.

CFNAI-MA3 for August came in at -0.28, which leaves June, July and August all below the -0.25 line. Monthly for August was -0.43. In March/April we took the big hit - the March monthly was +0.43 and then April was -0.84. Since then we seem to have marked out a new negative plateau, but unfortunately it is probably not permanent. At these levels, CFNAI-MA3 is consistent with either slow economic growth or the beginnings of recession.

The bummer about this is that it occurred during the period when we had something of production rebound due to clearing of the Japanese supply line blockages. So from here on we get more of "pace" effect in this stat, and it probably isn't going to look that good. I'm not looking forward to this index next February.

On Thursday we get the GDP revision (maybe up a notch or two) and on Friday we get Chicago PMI. There's housing chaff in the interim, none of which really is going to make a difference. Wednesday we have durable goods orders, and I do want to see that one.

If you are wondering about the equivocal nature of CFNAI, look at this graph: 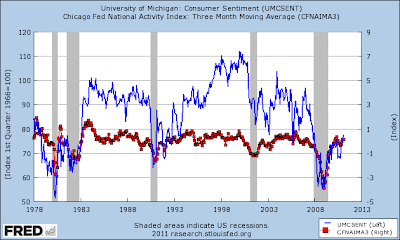 IMO, it's got "double dip" written all over it.

The MI Consumer Confidence is not an emotional reading - according to the retail reports, it's because people are spending more for necessities and constraining spending on stuff like pharmaceuticals, not to mention eating out, electronics, etc.

I just got back from the cardiac hospital, where the Chief got the coveted "Most likely to live if continues good behavior" award, and I have to head out again. So see you later.

PS: Of all the potential presidential candidates, I like Herman Cain the best. Take a look at his 9-9-9 plan. I have some issues with it, but this type of thinking is necessary if we are to have a chance of escaping pure economic ugliness. We are forced to restructure or stay in our death spiral. History says that restructuring can work, but we have to start moving on it quickly. I wish Obama were more economically literate, but by now it is clear that he isn't and has no intention of studying.

Comments:
"I wish Obama were more economically literate, but by now it is clear that he isn't and has no intention of studying."

The problem is presuming he decided he wanted to study, who are his tutors, but the same bozos that got us into this mess: Larry Summers, Timmy Geithner, Ben Bernanke, and an occasional drop-in from Robert Rubin.

But you were right from the beginning. While personal finances are most certainly not macro economics, I do think the former is a necessary if not sufficient prereq for the latter. In that regard Obama seems barely able to manage his own personal finances. He makes the Clintons look like Scotsmen.

I'm pretty sure Obama has gone through life seeing money as something that simply gets conjured upon demand from ridiculously rich white people so long as one asks the right way. I don't see that he's going to learn anything to the contrary either. I rather suspect his post-retirement speaking fees will make even Hillary blush. So fortunately, despite all this turmoil, we don't have to worry about Barack, he'll do OK.

Allan - it does seem that we managed to pick a person almost uniquely out of touch with the way the economy works.

That was the hope and change people wanted. Magic.

I was glad to hear you like Herman Cain. As of this point, I've been very disappointed in Perry, can't forgive Romney for his MA healtcare plan, and though I like him, don't think Gingrich is electable. Of the field, I think I agree with you--Herman Cain's the best answer.

Of course, Obama doesn't even come into the discussion from my perspective.