It can now be said that the economy has experienced a third straight year of “spring swoon.” In 2010 this was provoked by a premature recovery that made the first quarter look stronger than it really was, and the 2011 culprits seemed to be the supply chain disruption from the earthquake in Japan, as well as the Arab Spring’s impact on oil prices. What seems to be the problem in 2012? One explanation holds that the European crisis has become this year’s “black swan” as it has affected everything from banks to exports. A second opinion contends there is nothing really wrong with the economic recovery, but that industry is just taking a breather. A third holds that the consumer is hibernating again as they react to everything from high jobless numbers to inflation.

The latest Credit Managers’ Index lends some support to all three scenarios, but mostly the data underpins the sense that consumers are in retreat.

We have no idea how that happened!  Fortunately the fix, which would be lower energy prices, is pending. NACM is not bad, but it's pretty much where it was a year ago in May, and given that we haven't had the devastating manufacturing impact of the 3/11 disaster, that's surprising. We are now comparing to a very weak period in the US economy.

In 2008 the popular kids club was all about credit impacts, but what crashed it was the Main Street economy which had gotten crushed by costs. Same old same old.  Credit can run the costs along somewhat, because people will borrow to buy. But costs have to stay in line with incomes.

Yield on US 10 year at 1.57? It could go lower. Earlier this year I had a summer low, and it was scary low. It was so scary I couldn't believe it. Well, this is scary but not as low as that scary low, so I guess we have to ride out the commodities correction and see what happens.

You can have expansion at these levels, but it means that significant economic adjustments are taking place. See, for example, the 84-85 period: Yesterday there was a whole bunch of housing blather about pendings, etc. True, the Month over Month dropped more than 5% SA, but it doesn't mean anything. FHA increased premiums in April, which brought sales forward a month or two. So pending home sales for April (sales in May/June mostly) are of course going to be suppressed.  You'll get a true read on pace from averaging existing home sales for April, May and June. Not before then. FHA still "owns" a huge portion of the market for anyone who doesn't have a large downpayment, so they control the deal.

It's important to understand the FHA mov before blithering about these housing indicators. For once, NYT did a good job with it. FHA shifted cost burdens from better-qualified buyers to crappy would-be refiers, and of course it is going to shut down sales a bit. In many areas the major bar for purchasers is the downpayment, given extremely low mortgage rates which make the cost of buying less than renting for many would-be buyers.

The US economy seems to be in a relatively sweet spot (skipping recession) but of course that is overshadowed by the tremendous international can of whoop-ass slowly cranking open. India's in real trouble, China is in real trouble, Europe - it's the revenge of the nerds. The popular-kids crowd that runs Europe just never had to deal with this type of adversity before, and they are ludicrously inadequate.

I will be blogging more. Part of the problem is that words utterly fail to express the dark hilarity of Europe. China has an old-fashioned bubble going on, but they are trying to stamp down. The leadership is at least working on it.

India has the same old, same old. The legacy of state-controlled interests which attempt to block outside investment, a gruesome fiscal gap that means they have to attract a ton of on-going foreign investment to make ends meet, the ridiculous energy subsidies, the cost of which is mostly hidden in oil bonds, and so on.

Needless to say the commodity bust will continue. It appears this morning that Draghi got Monti to threaten Merkel on Eurobonds. The interim plan for the ECB is to put money directly in banks, but they can't keep going on that for long.

Anyway, here's actual footage of the Eurokids working on their Euro problem. They are only really worried about Greece because if Greece runs, then they lose the Greek excuse:
// posted by MaxedOutMama @ 5/31/2012 06:06:00 AM  5 Use These Comments

The virus knocked me down hard and everything's way backed up, plus I have little energy to work with.

As soon as the alligators let go of my leg I will resume.

The Moment Of Total Consciousness Impends

So at least we have that to look forward to....

I have the flu, and no one should have to read a monthly employment report this bad feeling this sick. I'm sorry, this is totally unacceptable. The assignment will be marked incomplete. The economy has a month's extension, and the final grade will be issued next month. Go away and don't ever do this to me again.

Household Survey. By golly, this hurts. Just accelerating into the first trough. Since February, our two-month total of job losses is 200K. That is unfortunately far beyond the limits of resolution on this survey. It does not help that last month's reported drop was 31K and this month's reported drop is 169K.

The reason the unemployment rate is dropping is because the participation rate is dropping. 58.4%. Last April's participation rate was 58.4%, and this April's participation rate is 58.4%, and we got a whole lot of nuthin' going on. The not-in-labor-force grew by 522K this month. Well that is not really a surprise, because it's 2012 You expect to see retirements accelerate right now. But if the economy were slightly healthier, you'd expect to see the young 'uns moving into the labor force to pick up vacated jobs in higher numbers. Instead, the cosmos is filled with fever, muscle pain and the echoing sound of no freakin' job creation. Up until the last few months we DID have net job creation, so we cannot pretend that everything's fine.

The establishment survey looks better, but unfortunately there are some disturbing elements. Couriers and messengers fell, grocery stores are still cutting a bit, and although general merchandise gained handily, I'm afraid a good chunk of that is a calendar artifact.

I can't run through the totals in the ES and not just know that we have shifted to the point where job destruction has outpaced job creation. We have a pop up in temp employment, which I believe to be real and an indicator of caution in permanent hiring.

When you factor in the substantial gains in the initial claims series, it's clear that we have red just about pacing green in the following B.E.D. graph (which is only through Q3 2011). Maybe a little above green. It's a very negative development. 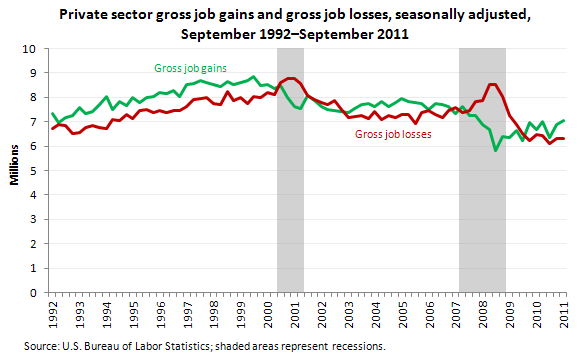 Wonder Dummy is far too febrile to give you a blow-by-blow of all the bloody gore and mayhem going on in Europe, but it seems from the Markit PMIs that Europe fell right through the floor in April. Several main structural supports gave way, and BANG! down it came. This time it's worse, because the Czechs and the Poles are drawn in. Germany is definitely in a skipping recession and may be entering full recession, and it's the best in Europe!

This has implications for the US. Our economy will be negatively affected in the months to come, as will the Chinese and Japanese economies. Therefore an employment report like this rather accentuates the future difficulties. The North American (Canada, US, Mexico) net manufacturing trend is holding up the global trend, so one must develop a certain fatalism about the limits.

I was expecting a drop in Household Survey employment of about 50-70K, not the 169K. Rail seems to be hanging in at present YTD levels without more degeneration, but the problem with this is that now we are well into the period last year when the Japanese disaster showed up strongly in our figures. To keep current pace we should start gaining YTD YoY.
// posted by MaxedOutMama @ 5/04/2012 07:14:00 AM  10 Use These Comments