I'm feeling better, so I thought I'd share the humor with you all.

Despite the many fascinating analyses of the FedStrat one can read, the reality is that the Fed has a minor technical problem with its asset buying program.

To understand this problem, you do not need a degree in advanced financial matters. You need a brain, and possibly a little banking or business experience.

The banking system in the developed world is also dependent on stable collateral and stable reserves, which is the reason that government-issued securities (sovereigns) are so important. They will become ever more important, as this Bloomberg article gracefully hints:


Banks are facing a growing list of demands from regulators to seek out highly liquid assets as authorities move to bolster the resilience of the financial system. Re-use of collateral is one way that lenders can satisfy the tougher rules, amid warnings from banks that there may not be enough highly liquid securities available to satisfy accumulating requirements from supervisors.

If the world literally runs out of collateral, the rush into hard assets is inevitable. It's a pretty good guess that warehouses in China stacked full of commodities are also used in the collateral rush. It's also a pretty good guess that the same piles of commodities are instantaneously quantam-tunneled from one warehouse to another on financial statements.  Advanced lending physics, that.

Think of it this way. A bank lends and knows that some of its lending will produce losses. Thus it reserves a certain portion of its profits to cover those future losses. It has to put that money somewhere. In the developed world, a big piece of those reserves have normally been stored in sovereign and sovereign-guaranteed bonds. Alternatively, it must put its reserves on deposit at the Fed.

Now the amount of reserves (which reduce profits) that a bank stores this way are related to lending risks, and lending risks are related to collateral. Collateral relating to commercial loans goes from the dicey to the PDG, in this ascending order:
1) Future profits (future cash flow surpluses).
2) Current operating reserves of the company plus cash. This means that the lender could hold or take an interest in cash deposits or have the company pledge its working accounts. In practice, you can't take money that the company needs to fund its future cash flow without ditching your own loan, so it's really excess operating reserves of the company.
3) Stock (if the company is public).
4) Hard assets. These are not generally very liquid, but they run from warehouses full of quantam-tunneled zinc and copper in China to things like office buildings, trucks, and manufacturing inventory. Except for things like office buildings, which if owned can be sold with a lease-back option, most manufacturing-type assets are needed for company operation, and thus can only be liberated in a liquidation, which may force future additional losses on your loan. However if a company owns ships or a truck fleet, you may be able to liberate value by transferring ownership with leases without putting the company out of business and ditching your own loan.
5) Securities, such as government bonds or government-insured bonds or commercial securities insured by a reputable insurer which are owned and pledged by the borrower as collateral for your loans.

So in the end, when things go bad the entire chain is still acutely dependent on cash and government bonds. If things really go bad, the liberation value of trucks or ships or office buildings may become minimal. Four years later you may recover your losses that way, but in the current period, you have to recognize losses on the loan. Stock value is highly variable over the short term. In widespread downturns, the relative values of government bonds or government-insured bonds go up, so that is your best real liquid collateral option other than cash. The longer term the better, because the yields on the short bonds will drop, so having a nice juicy 10 year government bond with a relatively high yield compared to short-term interest rates in a downturn is better than gold.

Now what happens when a central bank acquires a lot of the stable securities? Hmmm? The Fed currently has about 2 Trillion in US Treasuries. It's currently buying 40 billion a month, so at the current pace it will have about 2.25 trillion in another six months. The Fed wanted to shift this mix to long bonds to suppress mortgage interest rates. Here we might wonder what is available, and according to the Treasury: 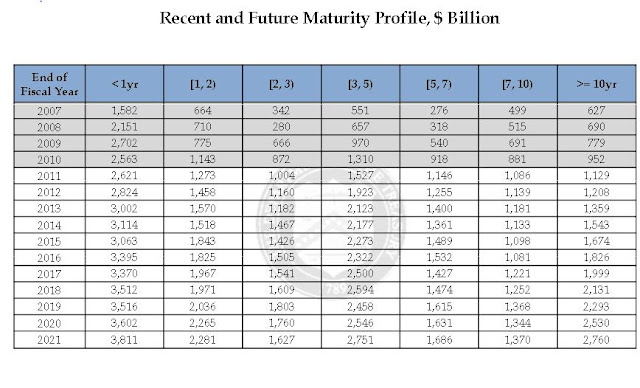 The Fed is exhausting the supply of longer yield bonds and bills. Therefore a lot of its holdings are in shorter durations still. The Fed cannot afford to become the market here, and it looks like it may end up with 20% of the total supply if it sticks to the May schedule. If you want to be a little less redneck about it, the Chicago Fed has a presentation by Win Analytics up.

The Fed started buying the 40 billion NEW a month of Treasuries in December. As of the end of November, 2012, total federal debt held by the public was 11.55 trillion. As of August, it is just under 11.95 trillion. Thus over 10 months the new Treasuries buying by the Fed corresponds to almost all Treasury new issuance. The Fed did not in fact expect the supply of Treasuries to be constrained to this degree, and, and there is "hidden" issuance that hasn't emerged yet due to debt ceiling constraints. Yet still the Fed is an awkward position here. No doubt the Fed is waiting to see what is going to happen with the debt limit negotiations and future budget negotiations, and it will really make its decision on Treasury buying once it catches a political clue.

Still the quandary remains. In an expanding economy, the need for working capital and stable collateral values must expand. If stable collateral values cannot expand to the private market, then one would expect net market interest rates to rise to compensate, which would constrain economic growth and load more risk into the financial system. Companies would then be constrained in expansion by the need to store cash and fund new operating expenditures more from profit, or the need to buy hard assets to create collateral reserves, which has a natural limit.

In this respect, understanding why oil prices are rising as they are is no mystery.

All the tch-tching about the Fed removing stimulus too early is technically accurate, 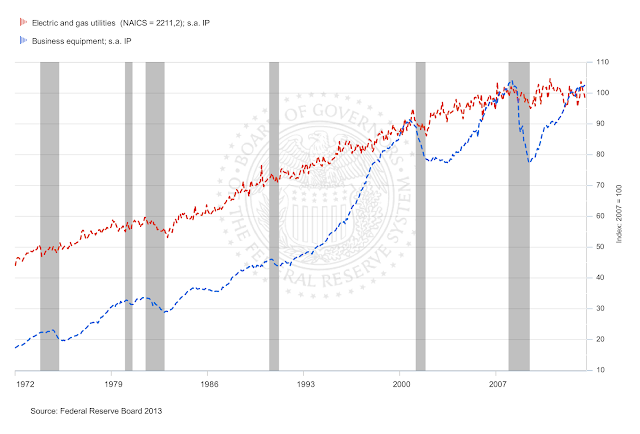 because by all historical standards, the US has hardly escaped from the last downturn, but has since accumulated rising debt levels, and now faces higher federal taxes which must drag on growth, plus the accumulated drag from old-age funding and the collateral degeneration of state and local finances across a wide range of US territory. There are significant drags and the drags are probably accumulative.

In particular, the flat utility production curve over seven years says something rather dire about the real state of the US economy and real GDP growth. Nonetheless, the business rebound indicates that we have a growing need for strong collateral to fund a genuine, if slow, expansion, and that implies that the natural result of Fed actions is already coming close to slowing economic growth.

The Fed may have to dump Treasuries out there again through reverse repos. Velocities are still dropping, and I can't understand the Fed's current policy in any other way but as a velocity drag: Home affordability is now falling dramatically, and there is nothing the Fed can do to stop the process. The strongest lending gains we now have are car and student loans, and this doesn't bode well.

The solution is clearly not to create an Italian-type situation, in which theoretical bank reserves are stored in theoretical sovereign bonds. The eventual detonation there is going to be most impressive.

The very high percentage of cash-funded home sales shows that we are shifting to the China model...

In my uncharitable moments, I wonder if that's a bug or a feature. If perhaps Wall Street intends to shift away from the public-funding model to a directed-lending crony capitalism model as in China and Germany. Could they really think that they'll remain in charge of such a system?

Rednecks must be very intelligent in your neck of the woods. I think I got most of what you said.
So glad your back. Don't ever leave us again.

Neil, if you believe you are Junker or a Mandarin, of course you think a Junker or Mandarin system is the way to go.

But China is not even a direct-lending system - it's a state-enterprise cheap-credit system morphing into 1920s type system. The "shadow" banking system is probably the most vibrant healthy part of their economy. The Mandarins of today, largely descended from the party of yesterday, are eating out their own guts. But they don't know it.

In a lot of ways, the US is socially evolving into the China of 30 years ago, but without the capacity for growth. You have the "party" composed of Ivy academics and the political establishment, the apparatchiks of the military and lower level government bureaucrats, and the winners of the industrial system.

It's not a recipe for growth in any way. Research is hurting, the ability to start new businesses and innovate is hurting, and the "state-owned/affiliated enterprises" have huge lobbying power and essentially are a part of the political system.

I think we screwed up very badly, Neil.

Anon - Oh, I'll never give up. But when it gets to the point where all I want to do is cuss in print, then I have to sentence myself to other matters.

I have not taken the Benghazi/IRS/NSA/presidential executive fiat disclosures well.

We are slowly abandoning government by Congress for government by fiat, and there is a strong trend line running through three presidencies that suggests that there are just no other ideas among the apparatchiks. Every few years we double down again.

But when it gets to the point where all I want to do is cuss in print...

Sounds like you need yet another set of charts to cheer you up!

Oops. What you need and what you get are apparently two different things. Sorry about that!

No dearth of borrowing out there...

I can't figure out Benghazi. The military folks who ought to know something are silently furious. I've never heard anything like this before, and it is causing me a good deal of worry. They've clearly been told in no uncertain terms that not a word must leak out--about what?

Why are the perpetrators waltzing around Benghazi giving interviews to CNN while under observation by SF infiltrators for months? Why aren't they dead or captured? Why is there not one interview with a Foreign Service survivor?

I can't think of any wholesome reason for such a brute-force cover-up of an event that should have been (from a political point of view) just an opportunity for the Administration to act tough.

MOM,
Go ahead. Let the bad words fly. I've been waiting for months for MMT. What about the national debt that hasn't changed since May? Tapering? Europe? California/Illinois/New Jersey? Stock market valuations? Bond prices?
Please. Let loose. If the subject merits naughty words, then naughty words we want to hear. Or naughty graphs. We will forgive a little cussing.
Matt