December Taper, If the Fed Is Still Sane.

There is no justification really for not doing it - and if they don't, I am going to have fun reading the FOMC discussion as to why not. Also satirizing it, because really, folks. This has passed all plausibility limits.

Unemployment claims have been solidly out of the trouble zone for months. Manufacturing, business and credit surveys are very healthy. Theories about "shocks" and so forth don't stand up to the solid data showing that in fact, the economy is strong enough to weather negatives. Thus it is time to roll up the fire hoses and put them away.

All the economic data shows consolidation of trend and the forming of a new floor at a level above the current one. At this stage in the game, the economy the Fed has grown used to regarding as a failure-to-thrive toddler is now a somewhat porky pre-adolescent that needs to get its butt off the couch before it turns into an obese adolescent. Take away the potato chips, Fed Papa!

The Street is struggling to locate threatening-looking comets in the night sky to justify the fleets of Frito-Lay (brought to you by the Fed) trucks rolling through the streets of Manhattan,  but even the comets are not cooperating.

I don't expect the Establishment jobs figure to be good this month, because Establishment showed a huge gap over Household last month, but with initial claims like this, no one can really claim that jobs are the scary monster under the bed:

Further, the reality is that Boomer retirements are going to continue. This is a very hard, hard reality, and it means that jobs will open up for the younger folks. That's a very hard, hard floor for Main Street expansion, and only Main Street expansion can possibly generate a solid, continuing recovery that rebuilds the jobs base. No amount of financial flummery ever does that.

At this stage, the Fed should be worrying about continuing expansion without distortion, and there they have a big problem - a problem that they evidently don't know how to address, given the last FOMC discussion. The theory about reserve fund interest rates was shot down aggressively by certain entities.

If the Fed doesn't take it off, the Fed is going to create a much larger problem toward the end of next year.

It's already almost too late. The Fed should have started the taper in September, and now it is running out of time to do it. They've already generated a bit of a problem, and the longer they wait the bigger it is going to get:
Top 100:

If this goes too much further, the risks of a top-heavy credit load start growing astronomically. And I don't want to talk about all the crappy commercial paper out there, and the subprime loans on the autos.

Update:
This isn't a problem now, because rates are so low. But if rates must rise ever, then a wise Fed needs to fire a few warning shots to prevent loans from growing too much: 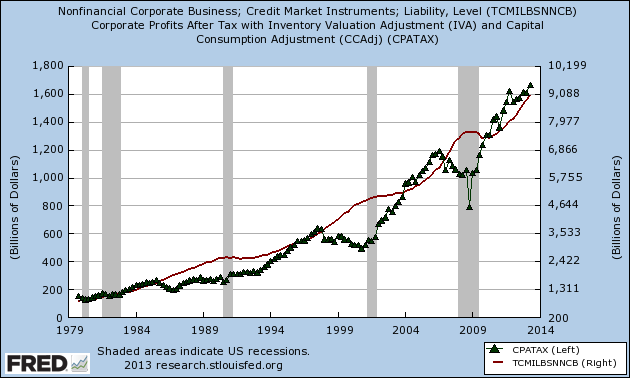 When rates do rise, there's going to be pressure on non-financials if the Fed lets a Greenspan moment develop a la 1998-1999. The ability to carry those loans and fund further expansions must be preserved.

That *would* make perfect sense, if the Fed actually had its eye on the real economy. If they'd back off QE and let interest rates rise, near-retirees and pension funds could breath a sigh of relief, and we could start the ground-up process of regenerating the economy.

But that ain't gonna happen, and I suspect you know it. The Fed isn't watching the real economy, they're watching the Federal deficit, debt, and future liabilities. Gotta keep them low, low rates.

3 handle on the 10y scares them. Mortgage re-fis down 60% since May has crushed bank performance. No way they they kick their masters at this point.

And that 3 handle isn't just a killer for housing... the entire economy is highly leveraged and can't handle higher rates, period.

Yellen on her knees in front of Obama is a more disturbing image than Paulson in front of Bush.

By then, housing was obviously a popped bubble, and the tremors and initial cracks in the market were apparent. The question on everyone's mind was whether the Fed would cut rates in an effort to keep the balls in the air and maintain the status quo, or leave rates unchanged and let nature take its course. They stood pat on rates and that was all anyone paying attention needed to know.

Subsequent events in 2008 showed either they were a little too sanguine about the withdrawal symptoms, or crazy like a fox. They did catch some blame early on from populists on both the left and right (I remember thinking Bill O'Reilly was making a fool of himself), but their long-term culpability seems to have been shoved down the memory hole in the MSM.

Nonetheless, it does create a similar situation today, exactly 6 years later. Do they taper and risk events in 2014 showing them a little too sanguine about withdrawal symptoms, or do they do what's right, signaling the party is over and it's time to start cleaning up some of the excesses before things get so out of hand there's soon nothing left to clean up for?

I don't know. I never thought we'd get anything after QE1. Perhaps not wanting to rain on the parade of America's historic Nobel Prize-winning and first black president had something to do with them? If that's all water under the bridge now that he's a lame duck with a fiasco for his namesake, they will be more apt to taper? Tough saying.

They've had 4 years to do the right thing and haven't yet. Why now?

Doing the right thing *may* have been an option 4 years ago, but it's way too late now. Every road leads to SEVERE pain, therefore they've no incentive to do anything but push that pain off into the future as far as possible and hope for a miracle lest angry mobs come for their heads.

Unfortunately, all this can-kicking compounds the consequences.

The reason for them to taper now is precisely that sequence - they were raising rates into the industrial recession that began in 2006, but they were doing so because lending was clearly in a speculative fervor.

They waited too long to raise rates, and they ended up cutting rates at the start of the recession - far too late to do any good.

Once a bubble has formed, there is only pain as a way out. Doesn't matter whether your Fed Head begins with a G or a B or a V - you have to inflict pain and hope to survive it.

Bubbles are a form of metastatic economic cancer - they grow and as they grow they eat up healthy tissue. You have to cut early to save limbs, organs and function.

By tapering the Fed can cut some of the excess enthusiasm demonstrated by no-covenant commercial loans.

This is getting too rich, too fast. I added a graph to the post at the end - unless one assumes that interest rates never will go up, it's time to tighten up before there is a Main Street backlash when rates do rise.

Washington State UI is so "healthy", they just added 9 week extension.
Must be getting too close to the medical marijuana dept.

Pain? Okay let's start by charging 0.25% on excess deposits. Then we get some inflation and then taper gets lost in bigger events.

Right. There was that little panic in August, which GS' market neutral hedge fund needed to be bailed out over. In fact, was it last year the Fed finally released the minutes or whatever it was from the next meeting where Geithner was called out by Fisher(?) and forced to admit he leaked the "surprise" rate cut to a few future TBTF CEO's.

The rate cuts created new market highs in Oct just a few months later. But then by December the markets had cooled off by what at the time felt a considerable amount such that people were worried/demanding the Fed keep the rate cuts coming as an effort to stop, or at least fire break, the housing problems from the rest of the economy. They passed on the cut and like I said, from that point on it was largely a foregone conclusion. At least until the fall of '08. I don't think they expected that back in Dec '07.

Well, that's how I remember events anyway. :) So yeah, now feels a little bit like then. Do they taper thereby signaling they are not worried about stocks, or do they take a pass and hit the smack "just once more."

Rob - when the last FOMC discussion was published, it turned out that discussions over excess reserves featured. Several banks promptly floated the prospect that they would then start charging depositors.

A 3.6% annualized GDP and low claims mean that the Fed is behind the curve.

Allan - if you look at the continuing claims, it becomes evident that the situation is different now.

Plus the Fed does not intend to raise rates - just lower the number of helicopters in operation. Admittedly that will tend to raise rates, but inflation is higher than officially stated, the economy is moving along, and the Fed finds itself driving along with a stuck gas pedal.

Bring up the subject whether they should or shouldn’t stop or taper and people seem to have no problem with spending or printing the $85 Billion month after month if that’s what it takes. Regardless if they understand what $85 Billion represents or not in any other form. It’s a fools way to look at it in my opinion. So here’s some perspective using items procured through the military.

If the Federal Reserve only cut their quantitative easing (QE) this month from $85 Billion to say $75 Billion. That cut would represent approximately the equivalent of building – FIVE – B2 Stealth Bombers. That’s per month. And that’s the reduction! Currently the Fed. is printing and pushing money into the markets as if we ordered (wait for it….) FORTY TWO brand spanking new B-2 Stealth Bombers – per month!

Meanwhile elsewhere... "Treasuries are resuming their bear trend, with 10yr yields pushing above 2.839%..."

It seems to me that Mr. Msrket has a lot of this priced in, and that this is the most painless moment to address the situation.

I think Mr. Market has no taper priced in, because Yellen isn't going to. There will be no significant taper - the Fed fired its warning shot 6 months ago and had to back down.

QE *is* the market, so it's definitely not "priced in".

60% we get some modest taper. I think the market has Jan/March as most likely.