August 2007 was when the negative correlations kind of took hold and drew us into the GR. I suppose maybe there's a small chance I am wrong. Maybe 10%, if that. But the data is assuming the eerie negative consistency that usually flags recession initiations.

The Fed says it's going to raise rates. Maybe it is. If so, this is not going to look very brilliant six months down the line.

Rail has been saying that we were entering the recession zone since last spring. Now it says we are there. There has been a notable weakening in the last five weeks.

CMI started flagging problems last spring also. The last report showed that services had followed manufacturing into the unfavorable-sucking-down-favorables zone. It's not that the sales side is so awful yet - but it is clear that credit to some players will have to tighten, so we've passed the "Heal!" stage. If there were enough strength in the economy, I'm sure it would just heal. But it doesn't seem to be there.

JOLTS is entirely consistent with the shift into negative correlations or with the "Healing pause" theory. But it always is at this stage in the game. Continued claims, the same.

But look at the quarterly services survey. There's a high error bar on this report, which is one reason I always say that we never really know GDP within 1%. There's just no way that it is possible to do so. But it is far more possible to detect whether there are forces that are pushing economic sectors to adapt, and it's easier to get a sense of whether they will be able to do so easily or not.

If you look at the non-seasonally adjust YoY patterns, you see that there's been a significant weakening in strength. That means we can't easily get over the hump that's showing in rail and CMI.

To that I would add the reality that theoretical inflation is so low that SS and DI and so forth recipients won't get an increase next year. It's probable that very few of these households are seeing their actual inflation rate for purchases below 2-3%, so it's going to show up across the economy as additional tightness in next quarter.

There's no indication that inventory clearing is going to help us out of this tight spot. Not at wholesalers:

Manufacturing has been in recession, with no indication that cycle is at an end. Look at the last full report. There aren't any green shoots. 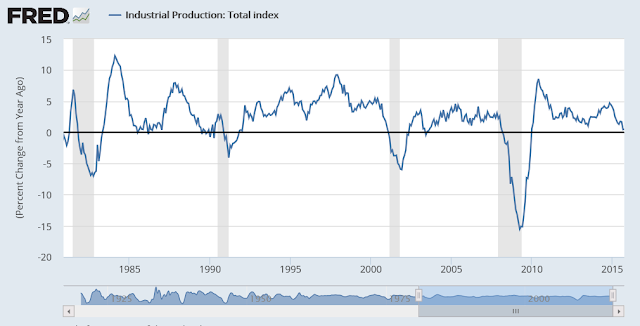 Technically, the Fed's move is of course going to allow rates to clump up if they want to do so. Since the Fed went on its talking jag, rates are converging a bit. Hard to know what it would mean, because the Fed had pretty much whacked the informational side of the market enough times over enough years so it learned to play dead. But one thing we can see - short rates responded; long rates are not going to be talked around at this juncture.

It appears to me that we are at the end of the credit cycle for businesses, and very near it for consumers. Consumers have been borrowing - on the low end, delinquencies are beginning to creep up. But the business problems seen last spring in business-to-business lending are now showing up in the form of rising delinquencies for leases and C&I at banks. Bank delinquencies & chargeoffs.

That's entirely what one would expect, but it is something creditors will need to control before it controls them. In particular, one sees the classic pattern. At the smaller banks, CC and ag are trouble, although in the last quarter leases and C&I jumped into the mix. At the 100 largest, CCs are still historically extremely low, but leases and C&I are beginning to show difficulties.

To that, add the retirement/government transfer constriction next year, and the unfavorables seen in business to business lending, and I don't see how we climb out. The economy has to get a little weaker, but some sectors are too weak now to be able to ride through that "little weaker" period without further negative correlations.

In the last employment report, temporary help was contracting. Over the last month or so fuel supply YoY trends have shifted from healthy expansion to considerable flatness.

While none of these factors are earthshaking in and of themselves, together they seem to be making a firm statement.

I don't believe the multi-unit housing market is going to carry through all of  next year, because I think rents have close to topped out and therefore construction will slow a bit. We have plenty in the pipeline, but I think the pace is going to have to come down. Just looking at the last Census report made me think this one's at peak.