Okay, this hasn't been very encouraging.

I found your replies on the last post rather deflating, because you seemed to be describing what a recession looks like in its early stages, with patchy growth and caution. There is a good argument to the effect that most business-led recessions would never occur at all if more worry were felt earlier, because that would spread out the necessary adjustments and prevent the "oomph" stage when too many cuts are made at once, which precipitates the final impact.

I am really, really pressed for time, but here are the basics:
1) If my claim that we had fallen into a recessionary cycle sometime late in the fourth quarter 2015 were correct, two things would have to happen in January. The first would be that we would see the near-term bond rates kind of converge. This did happen. It's continuing to happen. The second would be that FUT (Federal Unemployment Tax, aka FUTA, receipts) would have to stop rising YoY. Unfortunately, that has also happened. As of January 27th 2015/2016, FUTA receipts MTD are 460 > 442. This is a very definite change in trend that marks diffusion of negatives, which occurs after a recessionary cycle has begun.

2) CMI is about where I expect it to be - showing that manufacturing isn't very good, and forecasting that services has another downtick still to catch up to manufacturing. If services had already backed down more, I would think that maybe there would be a chance of a very short contraction. But it doesn't look that way right now.

The best countervailing news is Walmart's announcement about pay increases in March. This will provide a bit of a helpful bump right when we need it. Whether the theoretical positive is compensated for by hourly cuts is another issue, so I can't try to estimate the real impact. It is a favorable and not a negative. 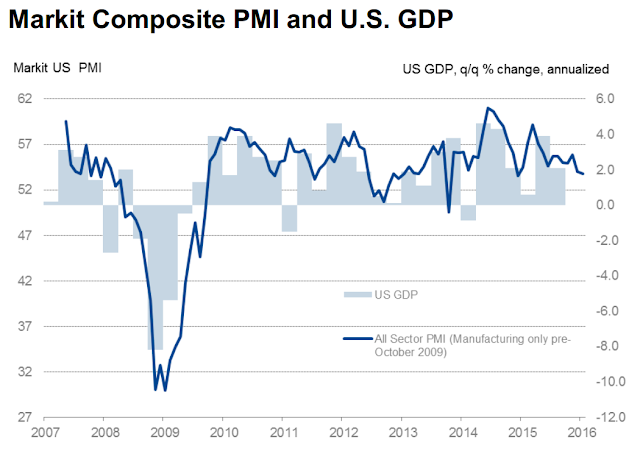 Look at where we were in December 2007, compared to where we are now. Nah. Of course manufacturing is not a bonus either: 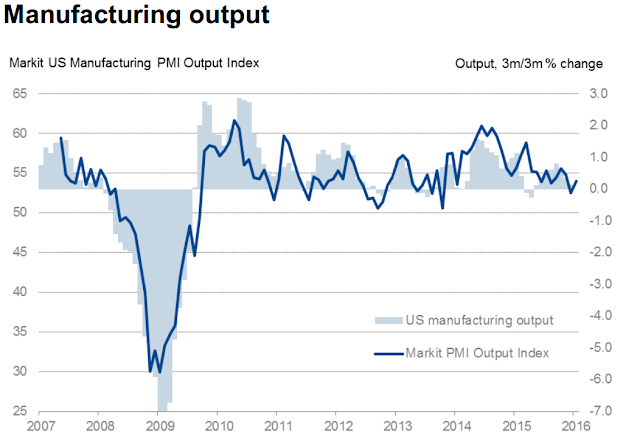 Going forward:
I expect this morning's GDP release to be revised up to about 1.1 or so. Maybe I am too optimistic, but compared to Q3 I think this is too low. Nonetheless, it's not pretty and I don't see any positives. Over the long run, the average GDP revision from the advance release is over 1%. Seriously. So I do not place much weight on reported GDP at the time it is reported. We really do not know GDP within 1% at any given current time. We really don't. It is much easier to track impetus and direction than worry about GDP.

I still think February is a good guess for the point at which NBER will eventually date this recession. Not that it matters.

For this cycle, I believe that smaller businesses are generally going to be less impacted.

But - WHAT HAPPENS WHEN WE REACH THE TAIL? If this continues too long, we have the potential for one of those European-style events.

The "negative rates" thing means hide your money under your mattress, right?

Or convert dollars to canned-goods-and-TP and hoard THAT.

A Nonny Mouse, that's certainly the Snarky Mark strategy. Given that Nalley's Chili that used to go on sale at 68 cents a can in 2007 now never dips below 98 cents a can, I can't say he's wrong.

Been an awful lot of inflation at the low end that our near-zero "core inflation" never captures.

I suppose I could be wrong, but correcting a recession with negative nominal interest rates does not appear to me to be possible. Instead, it appears fundamentally a deflationary strategy.

What is the difference really between real interest rates being negative, which is what we have had, and nominal negative interest rates?

If you are going to impose any significant nominal negative interest rate on banks you are probably going to shrink the money supply, which can't be a good thing for the economy.

If you are going to impose any significant nominal negative interest on people (the brilliant confiscate currency proposal) they will simply pay all their bills very quickly, and then invest in canned hash and so forth. But since they will need money the next month to pay their bills, they will have to reserve more, not less.

In theory, just mailing everyone some cash would cure some recessions that are just adjustment recessions. But if we did that every time we got in trouble, we might end up in a Japanese/Greek fix, in which the downturn becomes generational.

WSJ - yes, the consumer price index is not very good at capturing what is actually happening to households.

But I would suggest that ACA has a lot to do with our current situation. With higher deductibles and copays, plus the rather lethal practice of hiking medication prices by 1000 percent through legal machinations, the need for savings in many households has increased significantly. The legal changes have meant that many persons covered through work are experiencing higher contributions.

If your deductible over three years has risen from $1,500 to $3,000 or even $5,000 or $6,000, responsible households have to try to save that up. And if they borrow it because they need to (possibly from their own savings, on a credit card, or through a bank loan), they will then have to pay that back and save even more on top of it.

Finally, those who have given up on the insurance as a bad deal because they would have to pay premiums plus the deductible, so they are now saving up the deductible before trying to purchase the insurance, are obviously not helped by fines for not buying insurance that they cannot use.

Add higher rents (much higher!), a hike in food prices and a hike in basics, and it is not surprising that we are collectively a bit short.

I agree about negative interest rates, but does the Fed? I mean, what's the point of being in control of monetary policy if you're not a monetarist? In other words, if all you have is an interest-rate hammer, does every demographic effect look like a deflationary nail?

They're not stupid--they see the deflationary forces working against them. But as far as I can tell, they still think that hyperinflation is just a greater degree of inflation. They don't see the link between deflation and hyperinflation.

Well, that is the one trillion dollar question, isn't it?

It's hard to say. I would think they would buy bonds rather than playing with negative interest rates, on the grounds that the American population is well armed and somewhat provoked already.

They can do anything to banks they want to do, but they are not politically able to start confiscating people's money any more than they already have.

Negative interest rates will make for an exciting time for all those underfunded pension plans. I can see CALPERS and Chicago pension plans dancing in the streets, but it will not be the "happy dance".

But of course there is also saving for downpayments on housing, etc. Regardless, the need to save is real, and that is why I think Neil is correct.