First, the technical adjustment in January makes it difficult to accurately compare numbers. BLS does the best they can - if you read through the header, there are all sorts of tables explaining the adjustments. With that proviso:

1) The adjustment for the Establishment Survey now creates a nice declining curve for the last three months for private sector employment (280 > 262 > 151).  An obvious match to the initial claims, which have been slowly increasing since last October. Very pretty and all, but a total mismatch with the Household Survey.

3) Turning to the Birth/Death series, which is used only to compile the Establishment Survey numbers, the adjustment for January 2016 is highly negative at -233,000.  If one adds that back in, one gets a lot closer to the Household Survey numbers, which are used to figure the unemployment rate.

Now, how you reconcile this is up to you, but January FUT seemed to indicate that employment was not too good in January. When in total doubt, I usually use FUT.

I think we still have a two-step economy. We all know about the problem with oil. The inflection change showed up beautifully in the 2015 NACO county survey. The stronger dollar hurts export business. Both of these affect larger companies more than smaller companies, although there is a high feed-through to smaller companies from the oil.

My theory is that small businesses are on net doing much better than big businesses, because I believe that aside from the oil issue, which is real-but-known, the primary hidden mechanism for this downturn is big businesses having gotten too frisky with debt as compared to possible income, and now they are not well-prepared to deal with a soft patch with declining profits, sticky revenues, and an impending interest rate increase. In short, they are tightening their belts in a coordinated manner.

And, since FUT January returns are dominated by big firms due to filing rules, this theory would go a long way toward explaining the discrepancies as listed above.

Further, there is some supported evidence in the NFIB preliminary jobs report (good hiring potential, hard to find qualified employees).

The NATURAL cure for a situation like this is that prices fall (happening to some extent), big companies get real, and small companies profit by contracting/taking over work with their preferable, lower, cost structures. It is not clear to me that this can happen, and in part it may not happen because of ACA.

There is also a huge structural regulatory cost to our economy which just keeps getting larger and larger. It weighs relatively more on small firms.

Next (whenever I get to it), a slightly more detailed look at causation and current factors.  I would also like to refer to Learner2's comment on the last post, which I thought was very good.

Here's Something To Worry About

I prefer Ward's automotive data, because I find it the most accurate by far. Today I ran into this article, which is probably not available to the public. But you might be able to access it by registering.

The article predicts that first-quarter light vehicle North American production will be about level year over year and down from both the previous quarters. If this is true, we can take it that industrial production is going to be bad through this quarter.

Ward's then predicts that Q2 production will rise sharply, exceeding the prior three quarters and increasing over Q2 2015. Should the economy be in recession, one would suspect that this is too optimistic.

Since housing seems to be lagging a bit, with construction value increases YoY dropping sharply the last few months (at a time when weather was very favorable), that would leave us in pretty rough territory this year. Also, the unfavorable second-half retail spend is going to be cutting into state and some local budgets: 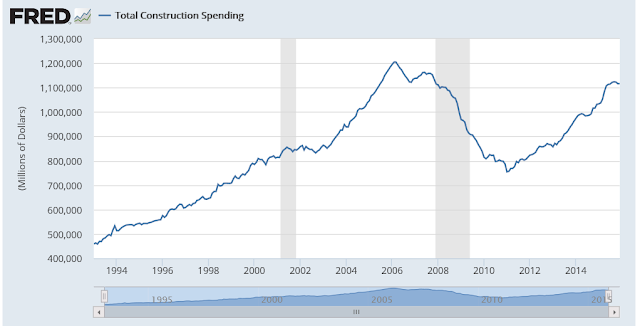 This is SA level Total Construction Spending. That impetus tailed out. 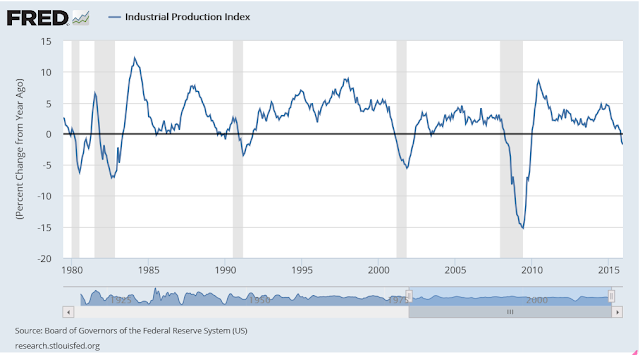 We had already lost this one - this is Industrial Production YoY, and it is not a pretty sight. End 2015. 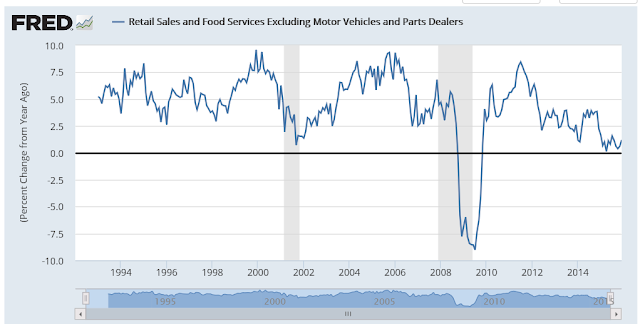 This is retail YoY ex motor vehicles. One would assume that car dealers are working hard on the incentives, so maybe they'll move out the inventory and Q2 production will be okay. But on the other hand, when one looks at the rest of the economy one is skeptical.

Car sales have been the remaining push, although really light truck sales was what carried the end of the year.

Shortly we will get NMI Composite. This morning's manufacturing was the same as last month - crap. I have never seen services not follow manufacturing with a fall of this magnitude before.

The peak for existing home sales, most categories of retail, and NMI Composite seems to have centered on July of 2015, with only a slow drift down since.

I would say that services is following now.

Federal Unemployment Tax seems to be a very sensitive recession indicator, probably because it is charged quarterly on a very low level of wages, and thus it captures new hirings and opportunities to change employment for better wages/opportunity.

Positives:
There was some sort of calculation change which increased SS awards for recent retirees. I don't know the details, but BEA calculated it at +8.8 billion annually. That will help.

Walmart's March increase may be pushing some other retailers to increase wages slightly.