We Are Not In The Mood For This.

So I am reading about "residual seasonality" affecting first quarter growth. I guess the "weather" excuse became too risible? The comic economic commentary index, which always soars in the beginning of US recessions, is rising rapidly.

Many Who Know claim that first quarter growth will not reflect the real health of our economy. Which is very vibrant and thrilling. Or something like that.

The NY Fed is going to get in the GDP forecasting game. But unlike Atlanta, they are going to modelize it, rather than depending on that irritating data. It's a model on top of data. Since they have already been publishing GDP models on Liberty Street, I don't understand what is so different?

Note for non-US persons reading this blog:
1) All US GDP numbers are always annualized.
2) No Fed bank ever forecasts recessions. It's an unwritten rule. Thus this is as close to a recession forecast as you are ever going to see from a Fed source.
3) The basic US annualized quarterly GDP error range is slightly more than one percent. 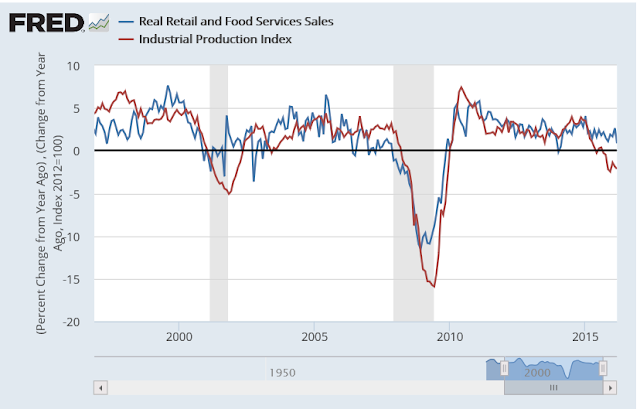 The crappiness hardly began in March. Really, folks. So retail joined in the party, a bit. That in a March that included Easter? Hah, it will be revised up. There will be sales in the last week. But still, this is not a growing economy.

Of course, there is always April: 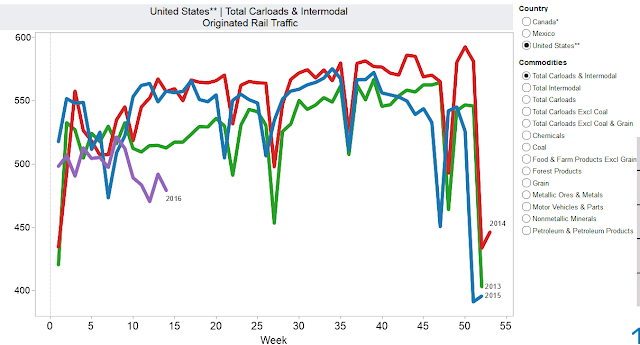 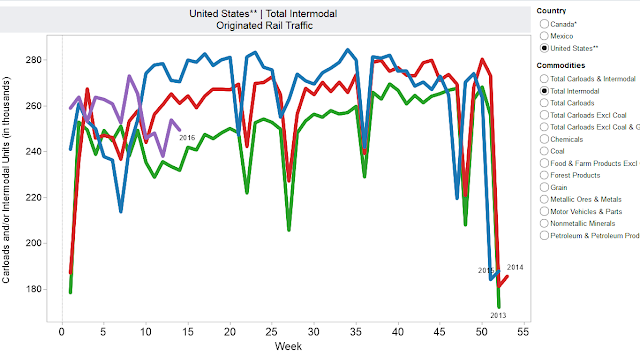 But now it is not just carloads joining the pity party. Intermodal has joined in.

April is the cruelest month? One suspects not, because of this:

That was February. Inventory to sales ratios can't keep rising forever (although they do contribute to GDP). Since March retail sales weren't very good, one can presume that we have additional adjustments ahead.


Since rail is lower, it ain't over. The trucking gauge has been running way better than rail, but look at the petroleum report. Four-week product supplied for distillate fuel oil is down 7% YoY. At this time of year, that's mostly trucking.


For a broader perspective, the Index has turned decidedly “south” over the last 15 months falling from a reading of 100 in December 2014 to 92.8. A “chartist” looking at the data historically might conclude that the Index has clearly hit a top and is flashing a recession signal. The April survey will decide whether or not the alarm should be rung. This month’s change was not statistically significant, just not in a positive direction.

This is what he's talking about: 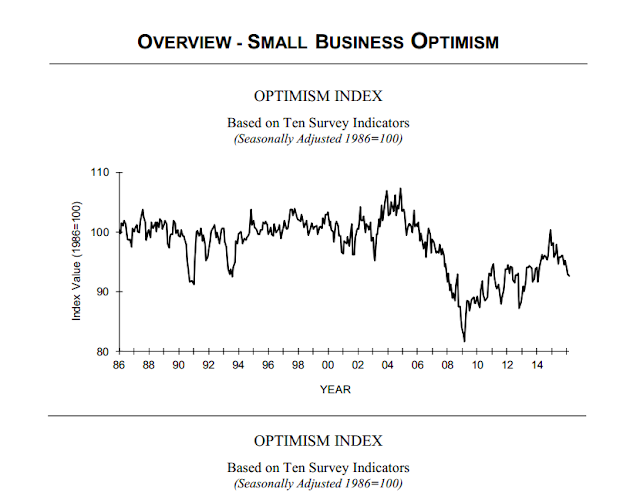 It should be noted (you may read the report on the website) that small business hiring appears past peak,

small business openings look to be stalled or past peak,

and, you know, there's perhaps not much more there:

If you read the link to the pdf of the report and go through the earnings/sales/sales expectations, particularly the last on the bottom of page 9, you'll see that vibrant hiring is unlikely. Price cutting in small firms often precedes a recession: 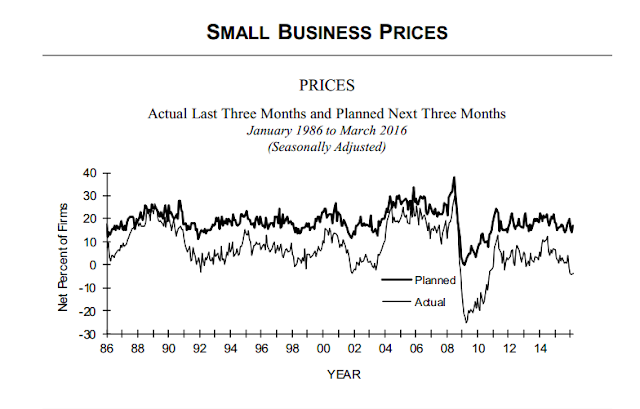 You may imagine how thrilled they are with the campaign for a $15 hour minimum wage.  When the law forces you to pay your workers more than you are earning, hiring preferences ratchet down.

April is the next "large" survey. I expect it to be slightly better. I think this is just going to ooze along, but not upwards. Ooze tends to follow gravity's pull.

Missing a recession bar, but you get the idea from looking at this long term Industrial Production graph: 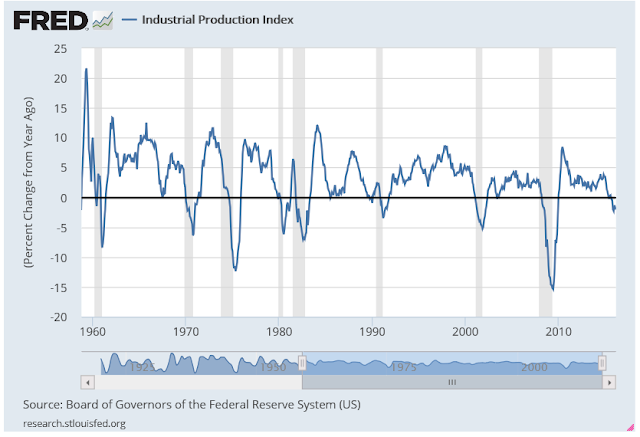 Note: In case you weren't getting it, Industrial Capacity Utilization (missing a recession bar): 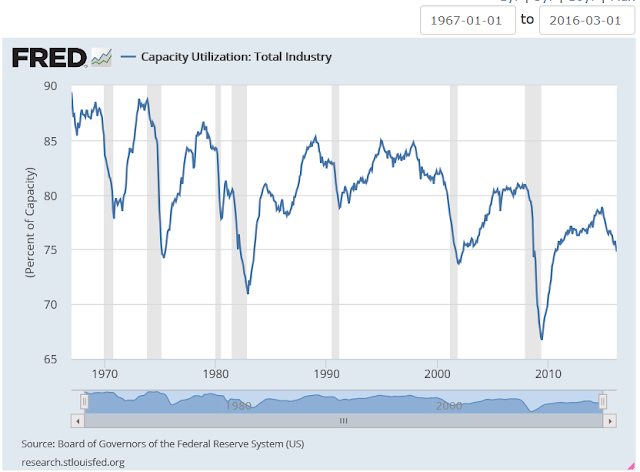 We are in a recession. A little adjustment dingie wouldn't hurt us, but I am becoming increasingly afraid that we are in a European ditch-digging type recession of the nasty type that peaks about two years into the cycle of quiet economic dysfunction.

What I am looking at as confirmation of this are the Treasury tax receipts:
March 2016: 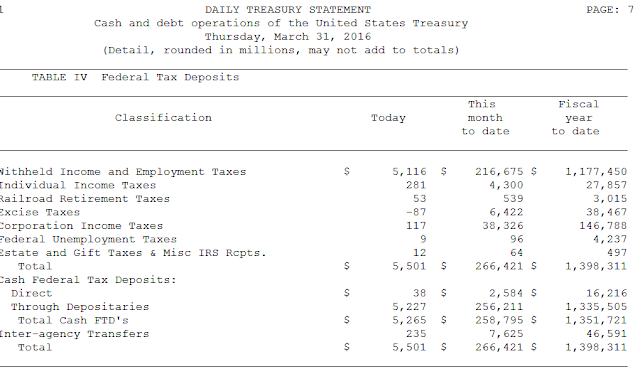 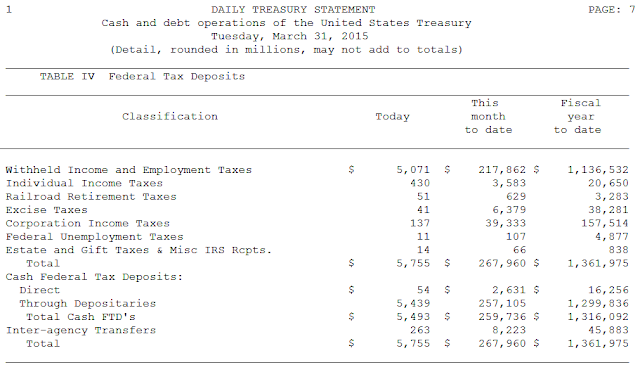 Note that withheld income and employment taxes are saying that income from employment is down YOY for March. That generally doesn't even happen in a recession! But low inflation probably has something to do with it. These figures were reliably predicted by the FUTA (FUT, Federal Unemployment Tax) change in direction months earlier. As noted before, we started out this fiscal year (Octover, November, December) with a fine YoY increase on this indicator.

Corporation Income Taxes are improving a bit, although still negative YoY. But this must have been achieved by cutting costs.

The situation is not temporary, because FUT is predicting a FURTHER drop.

March's auto sales were disappointing, although auto production figures in Q1 were very good. The daily sales rate was in fact the lowest since last Feb 2015.  But I presume the problems with some of the subprime auto loan ABS have something to do with the rather sudden March sales drop - lending needs to tighten from last year. Auto sales aren't going to help us that much YoY going further. I bet we'll end up the year a few percentage points down from 2015, mostly on subprime loans, which were holding up fine in summer of last year, but started to implode at the end of 2015. The oil patch is accounting for a lot of this so far, but on the other hand the sales share of subprime loans also reached an extreme high last year. You can only dig so far before hitting the sewer line. They found it. They will be getting out of that hole as quickly as possible.

Housing - eh. Purchase money apps are way up; sales are disappointing. There appears to be an affordability issue in many areas. It's not going as well as expected. Construction should still be decent through July/August, though. There are plenty of apartment buildings still in the works. But the YoY increase, currently up there in the 10 percent region, is going to fade out there as well.

The federal government is coming up with increasingly creative proposals to convince banks to lend to borrowers who really can't afford their home and borrowers to buy homes they really can't afford, but banks no longer trust the federal government at all. They know that when the tide goes out, no matter what they were told before, the politicians will all be screaming and pointing at their crotches screaming "Child molester, child molester!" So banks are not cooperating. In this rate environment, you cannot afford many bad loans. 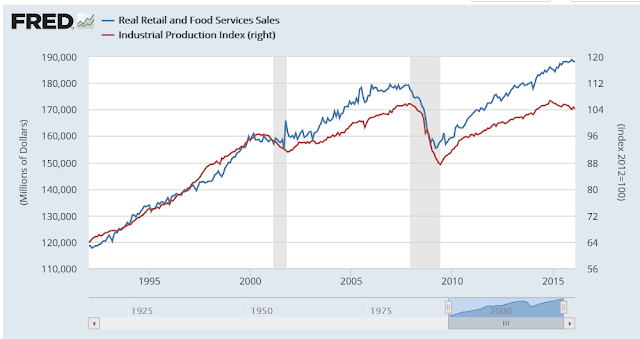 This is pretty much a classic US recession pattern that has been pulled like a piece of taffy.

Rail does not provide any good news:

You can ignore the last week, because of an early Easter. But in March things really started to go bad.

Note that there were factors this year that should have been highly favorable for Q1 YoYs, including a port issue which suppressed freight in 2015, and generally, a much less oppressive winter that should have helped the whole economy, including freight and driving-around type activity. Construction activity should have been facilitated. Most of Boston could at least see the street signs, which probably made pizza delivery a lot easier.

In Q2, these factors will not be present, and the situation is going to become more obvious. But only mildly so - again, this is not the classic US tip-over, but instead the climbing down into the ditch style of European recessions. But they are LONG. Very long. They do a lot of damage.

I am in something of a quandary, because the employment reports are so off-kilter with other data that I no longer believe them. I am unwilling to publicly speculate as to what is happening with them, but they aren't right. They're not true. No. Not happening.

Very highly paid employment is up over the year in comparison to low-paid employment. The weakness is in the lower end jobs. I know this because when I look at the February HI receipts YoY, they have increased more than the February FICA + DI receipts. As high end salaries run out their SS FICA cap, the discrepancy grows later in the year, although when there is a lot of job switching it is offset somewhat.

Balance of trade is quietly worsening. In fact all the lower-level data is rather consistent; economic activity is slowing YoY. And it simply must be  showing up in employment, which is pretty much the NBER definition of a recession. Interestingly, JOLTS job openings come very close to the retail peak/sag in timing (peak July): 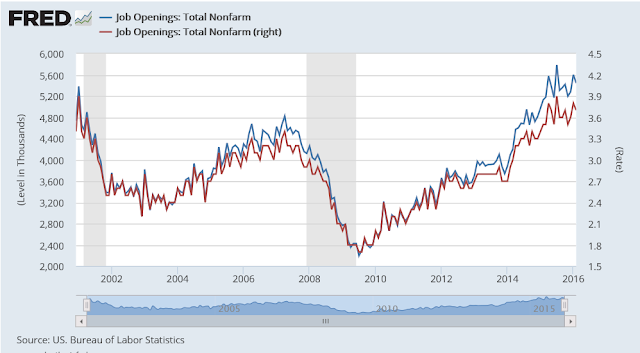 I don't see any epic crash forming, just a quiet inexorable sag. Manufacturing is not rebounding, and as things get tighter, there won't be much to rebound it. Inventories hadn't cleared as of January, and although there will be ups and downs, I don't think they can now:

If you look at the initiation of the last elevation, you'll notice it slots in well with the beginning of the retail stall and the JOLTS peak timing.

So I would shift my call to official recession beginning in March 2016. God only knows when NBER will recognize this. I don't see them as being very political, but they are not exactly street savvy either. They wouldn't know a subprime loan if it bit one of them on the butt, and most of the NBER committee members probably believe that mortgage lending based on income from individuals not obligated on the mortgage is a GOOD idea that leads to increasing economic prosperity. You might say that they are blind to some of the seamier nuances.

It might be next year before they notice.  But I would guess they'll say something in November, after the election.