I posted this over on Seeking Alpha.

Not much good seems to be happening, and I am concerned about the low pace of construction and a likely end to the short-term impetus provided by the auto manufacturing restart. That seems to be petering out.

I know it's a rough year, but in the history of our country there have been many.

There's a reason why we celebrate Independence Day. The founding of our country is only one chapter in humanity's struggle to establish a decent and humane culture founded on respect for human rights, but it is a great and wonderful chapter in a book filled with many sad ones. Every time we party on this day, we are saying something about how human beings ought to live.

In most respects, no surprises, but an uncommon amount of certainty!

Household and Enterprise Surveys agree for once. It is a miracle.
+4.9 million Household,
+4.8 million Establishment.

Consequently we can be quite confident about using the numbers in the establishment survey.

Of course big gains in manufacturing/goods production, with the auto restart. Over May and June we have now regained about half the jobs lost in April. The mining and logging component, mostly oil/gas, is still losing jobs as expected.

Services is more difficult. The two-month gain is only about a third of the jobs lost in April. Retail was a big gainer this month with almost 740K jobs added.

Medical is going to be one wild card. The Healthcare & Social Assistance category had lost about 2.13 million jobs in April. Over May/June the sector has regained about 40% of those jobs, with 475K being added in June.

Most of the medical jobs were lost due to people not being either able to access more routine care or being willing to access routine care. The ability to access the care is sharply improved in most areas, but the willingness may be lagging. This is likely to be a slow recovery sector.

Leisure and Hospitality had dumped nearly 7.6 million jobs in April, and so far has regained nearly 3.5 million jobs, with 2.09 of those this month.

There should be a little more improvement next month in these categories, but it is hard to tell how much. Some states are still in the re-opening stages, albeit a little more slowly on average. The sharp increases in new CV cases and now the increasing wave of hospitalizations has changed things for some populous states. Texas, Florida and California are back-pedaling a bit and plans for scheduled reopening of various establishments in some other states have been paused or rolled back a bit in states not seeing the large uptick.

TX, FL and CA are such a huge share of the national economy that it's a bit daunting; changes there are certainly going to show up in national stats.

The above are surveys based on sampling, although the strong correspondence between two different surveys should raise confidence in the results.

For another take on the matter, here is an update on Withheld Income and Employment Taxes as reported in Daily Treasury Receipts, shown as year-over-year change: 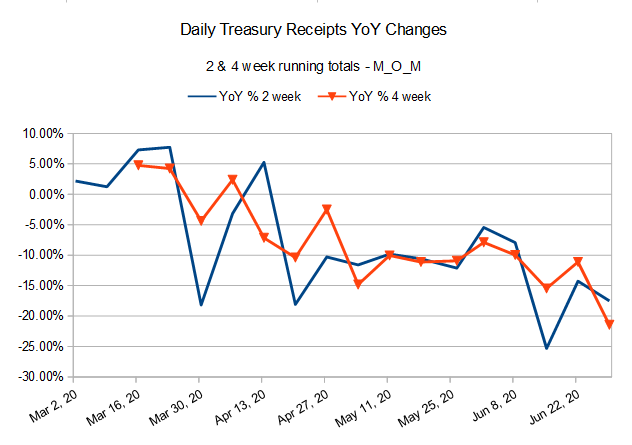 Smaller businesses are the slowest to send in payroll taxes, so recent upticks in small business won't be picked up. We'll see more of that in a few weeks.

Part of the fall off in June in payroll tax receipts is related to school closings; the losses in private employment were much higher.

Regardless, the income effects of the downturn are not totally captured by counting jobs. Shorter hours and wage cuts are leading to lower paychecks for many. From the Household Survey, about 4,700 more workers were unwillingly part-time in the survey week compared to June of 2019.

If you look at the four-week average in the graph above for June 22nd, the actual number was -11.1%. The official unemployment rate for June was 11.1%. Treasury receipts are of course delayed by weeks from workers on payroll in the survey week, but I have previously found that there is a good correspondence between those numbers. I'm not sure if that relationship still holds as well given the massive economic disruption we are seeing.

When workers are laid off, especially at the higher levels, they usually get severance checks and the withheld taxes on those severance checks produce a temporary boost in payroll tax receipts.

With that caveat, the trend I am seeing in the treasury receipts is forecasting a bad summer with a slowing economy. Congress had better extend the temporary employment programs pronto.