I am, however, laughing my butt off at the bond reversion, the hysterics over the Fed comments, and the pathetic hope that a final 1.8% Q1 annualized GDP created in the hearts of the Fed-dependent investing class, which after so many years now comprises a startlingly high percentage of the younger financial traders. Many of these guys have never seen a normal market without the Fed put.

First quarter GDP is not going to make a lick of difference to the Fed, because the Fed is clearly concentrating on a QE total that they can "afford" rather than on economic numbers, and they are bound to that because of the necessity to reserve firepower for later fiscal consolidation and the next recession.

In February Mishkin et al published a paper on the exit (Crunch Time, Fiscal Crises and the Role of Monetary Policy) and its risks. It lays out in some detail the unhappy position of the Fed:


The Fed could cut its effective drain on the Treasury significantly by putting off asset sales and delaying policy rate increases. But such a response would presumably feed rising inflation expectations. In brief, the combination of a massively expanded central bank balance sheet and an unsustainable public debt trajectory is a mix that has the potential to substantially reduce the flexibility of monetary policy. This mix could induce a bias toward slower exit or easier policy, and be seen as the first step toward fiscal dominance. It could thereby be the cause of longer-term inflation expectations and raise the risk of inflation overall.

But here's the thing - this paper was way too optimistic. See, for example interest rate projections vs reality: 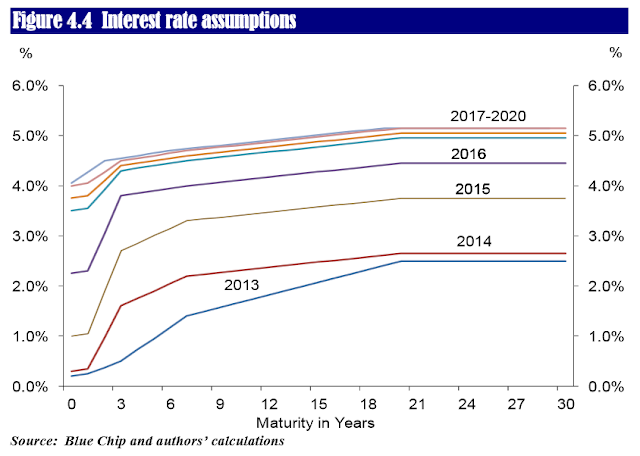 Oops. The ten-year is now where they projected it to be in 2013. And, as they carefully presented, their loss forecasts are dependent on interest rates - higher changes in rates, higher losses: 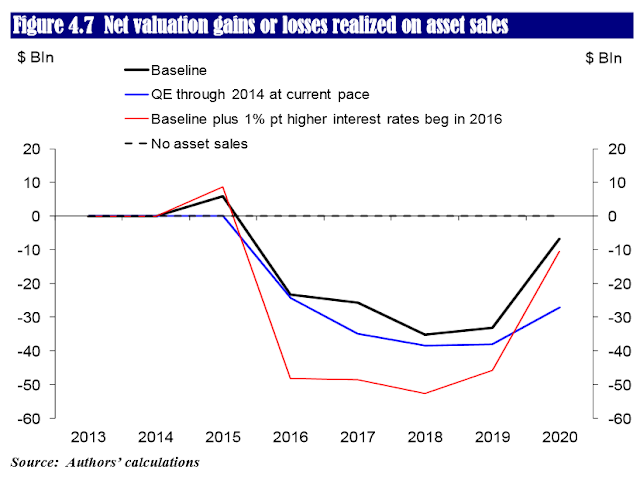 So they can't really sell much of their asset load, which leaves the Fed sitting on a boatload of excess reserves which it must somehow prevent from blasting into monetary circulation.The Fed has created a spring-loaded mechanism which it has only a few methods to control.

One of those methods - and the one they will now likely be forced into implementing by 2014, unless we are tipping into outright recession by then - would be to demand higher reserves, thus converting some of the excess reserves into required reserves. This will likely be done under the rubric of financial stability. However when they do this in combination with higher rates, they will have to pay a certain amount still on those reserves (to avoid tipping some of the larger institutions into trouble, which will be politically unpopular and will increase their losses.

The Fed is not going to sell its accumulated QE assets. It will instead let them run off. It must therefore limit current QE, because nobody at the Fed believes we are going to go another five years without a recession! The Fed needs to leave room for further QE to offset future problems and any feeble federal attempts at redressing our fiscal imbalances.

Neil, this is for you: In this paper the authors discuss how the Fed accounting will work in the case of recognized losses. They quietly changed accounting procedures in I think 2011? so that they will stick them in a deferred asset account, which is essentially a claim on future profits. In order to cover operating cash flow, the Fed will create new reserves just as it now does when QEing.

But here's the problem: The theory that the Federal government can just keep borrowing and that the Fed can just keep buying the market excess of Treasuries, thus preventing a fiscal crisis in which US bond yields abruptly spike, is dependent on the idea that the additional Treasures the Fed buys will essentially be null borrowing, because the Fed will return the interest payments to the Treasury. The Fed can only do so if it is making a profit, which it cannot do under current circs. As interest rates rebound even somewhat and the economy stays out of recession, even the Fed's net interest margin begins to get pretty crappy and slim.

The other way in which the debt can be financed is that the Fed keeps buying and creating excess reserves, but the federal government keeps raising taxes so the net borrowing in the economy can't increase much, therefore controlling inflation by essentially depressing the circulation of money. In this scenario, asset prices can stay pretty high for quite a while, but the Main Street economy begins to look more and more Japanese (and not in a good way). Ultimately this probably ends up at the same Argentinian-type endpoint unless entitlement programs are sharply cut (deflationary, Japanese endpoint), because entitlement programs are now so cohesive that there is a growing Fed subsidy of constantly declining real wages for the bottom half of the population (Japanese-ish). Thus in the low-growth labor slack internal devaluation, the Fed has to keep borrowing to subsidize living costs for the great unwashed masses, who have guns (more Argentinian than Japanese).

It's worth noting that this year's tax increase seems to be fueling consumer borrowing to cover living costs  (see revolving consumer credit).

Mortgage rates have risen very dramatically in less than two months. At over 4.5%, the FHA cost is nearing 6% when the annual insurance premiums is added. We cannot afford too much more of this without suppressing first time purchasers. There has been a huge jump in mortgage rates since the FOMC meeting and the shock, awe and horror moment. Before the conference they were still hanging in at about 4.1%.  As of now, 30 year fixeds have risen about 100 basis points (1 percent) since the end of April. By the end of the summer the effect on home sales should be showing up (existing home sales clock about six or seven weeks after contract.).

The rebound in the housing market is compensating for the flattening out of the auto sales market and keeping us off the economic floor. If you are the Fed, you are not going to like these rates.

But the Fed heads will be contemplating the nasty possibility that if the retract and Uncle Ben promises that the Fed credit card will be paid in full through 2014, the next attempt to exit might create a much worse shock. Nor is it clear that rates will go down that much even if the Fed now publicly repents - the rate shock impends and this week gave all the Mr. Market types a preview of what they might be facing.