The Fed WANTS Us To Think It Will Raise in December

Which is interesting. I think the Fed was refusing to raise rates until some sort of budget deal was struck, not that they want to come out and say that. Instead they are talking about how nice and strong the economy is.

We have gone through a seesaw this year, with about the first 18 weeks being decent, then a soft path until week 33, after which things hung in just a bit below last year, and then around week 39 things started falling out and they aren't quitting.

Carloads haven't really worsened from the soft patch earlier in the year, though they had rebounded and then sank again.

It's intermodal that followed carloads. You can see how it has slowly been weakening YoY in the second half.

Some individuals might think that this suggests that the economy is NOT weathering the manufacturing slowdown.

It doesn't look like trucking will pull out a YoY even or better in January. Because, what, precisely, would trucking be shipping?

Inventories are pretty high and sales have been low. We're not set up for a strong rebound. Business inventory/sales ratios through September explain why rail is so slow:

But I gather that retail is supposed to save us because goods are going to be shooting out of the stores so fast! 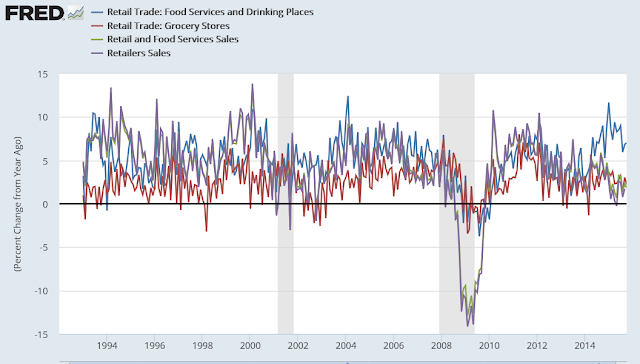 But retail, except for restaurants and bars, is distinctly so-so right now.

The first thing I thought when I did the first retail graph above was "food costs". Restaurants generally have contracts, and if you have food inflation it delays, and you can get that shift.

But in this second graph below, we see combining retail and food services doesn't look too hot. And so when I saw that, I thought, "Oh, the cross!" Grocery stores are the standout. 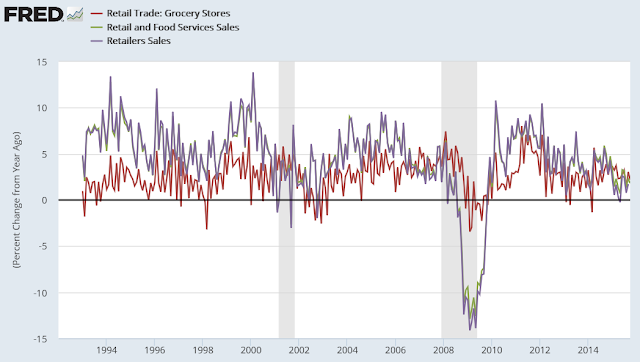 And we do see the cross - grocery store sales exceed retail sales in growth patterns YoY. Common at the beginning or just before recessions. Otherwise, not. It's the Death Cross for economic expansions.

Death Cross up close and personal: 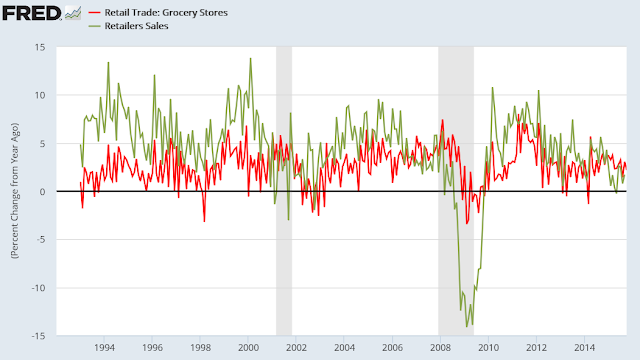 Cool that I did that in Christmas colors, right??? I'm sure the retailers are planning major discounts. MAJOR discounts.

So far, I would say that the only reason we are not already in an obvious recession is strikingly easy credit. So now the Fed says it is going to tighten.

Now, I believed that the Fed should have made this first tiny baby step toward normalization in the spring, because at that time I knew we would carry through on credit-fuelled housing and auto sales (esp. light trucks, which go strong and steady in expanding construction).

Now we are in a weaker position, facing winter. Consumer credit usage is up, manufacturing is in a very weak trend, and I suspect housing is a bit long in the tooth. By next spring I am not sure that it won't be stalled.

Housing prices are just too high for first-time purchasers, and some of the structural steps that were taken this year to help them on no/low downpayment purchase mortgages will have mostly worked their way through the system by next June. Multi-unit (apartments) have been good and usually are durable in the pipeline, but some of the underlying data there has been looking like it's getting a bit aged, and will be vulnerable to protracted weakness. Rents have risen a lot, and it will be hard to cut them because of funding, but rents are rising far too steeply for incomes.

I have always believed that recessions only occur when there is no possible path out, and I would have preferred that the Fed kicked the can a bit earlier this year to give us a little bit less impetus so that we'd buy some time this next year. We're getting close to the "no possible path" zone.

According to most the weather people, this winter could be easier. That would help.

There is no raise for SS in 2016. That's going to hurt us. Health insurance is not going to be an asset, and that's a big understatement.

I am not totally certain that we are going into a recession, but now I am convinced that if we do fall in, we are are going to have a very long European-style recession. It's not a very comforting outlook.