The two-month (Feb to April) Household number is +70K, for an average +35K per month.

Establishment is showing a much better number for those two months at +184K per month. There were downward revisions to the previous two months totaling -19K.

Looking at Table A-8, it appears to me that some of the big Household Survey swing is actually due to weather- and calendar-induced SA perturbations. So I do not foresee a sudden drop-off in employment in the near future, although I think employment weakness will slowly become more obvious by July.

I am not surprised by the weakness, because FUTA has been forecasting it.

The air is slowly leaking out of this expansion, and I really don't see what will redress it. There is time, but barring sudden fiscal stimulus, the weakness will continue to very slowly drag down the economy.

Looking at grocery stores, it appears to me that a price correction is underway. I expect the inflation rate to begin dropping sharply. This may help on the consumer side.

Both auto and housing sales are showing clear signs of weakening trends over the last few months. These trends have not yet impaired production, but when they do later in the year (or whenever managements begin to cut spending), we will see more traditional recession signs.

This is still a business-led downturn, and those do not have a sudden effect on employment. Inventories are too high, still. This is not going to rebalance on its own.

The dollar is weakening in response to recent data, but global growth trends are not very strong, and it will be hard for US manufacturing to pick up on export orders even with a weaker dollar.

Addendum & Note:
The theory that the strong employment of the last few years is enough to keep us from a consumer participation in a weak business cycle is rather stupid. If one looks at the longer term, this has been a stunningly poor expansion in terms of jobs: 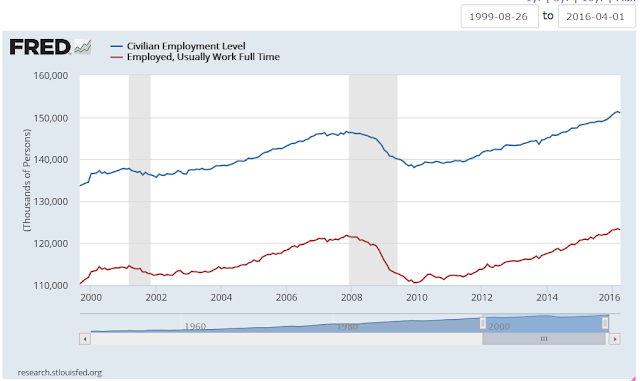 The population has grown but full-time jobs are only a few million more than they were before the previous recession. There is literally not enough in the system to support housing values and rents; there is a limit to what credit can accomplish.

People are running up their credit cards again, but this has a natural end: 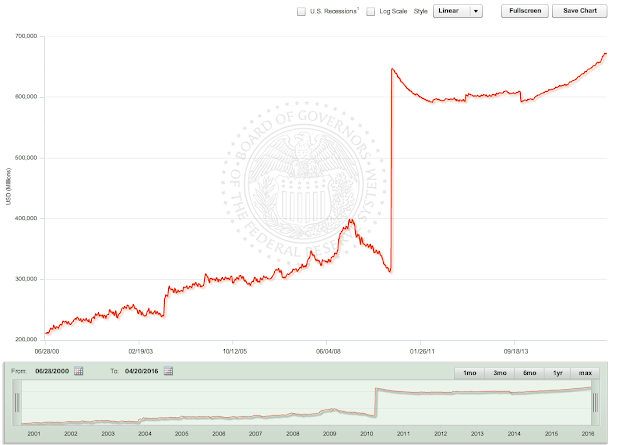